I was wondering whether it is already possible to import manuscripts into Manuscripts.io written with the desktop version of Manuscripts in order to test more extensively? It seemed that importing .manuscript files is not yet possible (and neither is export), or did I miss anything?

Along the same line, will a Manuscript Desktop v2 be released alongside Manuscripts.io v1.0 or is that a plan for later on?

There’s a bit more going on under the hood than what is apparent in the UI: the file format (the “schema”) that Manuscripts.io uses (which is already available openly actually – we’re going to update it + add lots more repositories of open source code imminently) is 100% compatible with Manuscripts for Mac.

Manuscripts for Mac 1.x has as one of its file formats a “manuscripts-json” file, and we are going to be very soon extending that file format in the 2.0 beta version to a “project bundle” format that includes that kind of a JSON file + figures etc attachments that are present in the manuscript.

Now, regarding timeline: we are really focusing on getting the core editor component and collaborative editing functions 100% awesome first because when those are super reliable we are really 99% there with the editing experience of the new Mac app as well (the copy & paste, undo behaviours for example are all shared in this new version between the desktop and web versions, and whilst they’re already really better than what Manuscripts 1.x provides, we have many bug fixes and missing features to add).

We’ll probably start distributing really early copies of the desktop app relatively soon (certainly hoping by the end of the year, but this is not a promise but an engineer’s guess!) and quite honestly we are going to listen to feedback first before committing to release schedules (we want to get this right, and not rush).

Re: testing the compatibility, that’s actually a good point.

Perhaps we should indeed make a small Manuscripts for Mac release to enable testing this compatibility as import / export steps sooner than we actually distribute the early experimental versions that have the new editor bundled. We’ll think about this with @dan who’s leading the desktop app efforts.

That sounds great! I agree 100% that reliability should be a top priority. After that, I would think that robust collaborative features will be the main draw to make people switch from their current approach. I look forward to testing it out once it’s possible to import an existing, slightly larger project into the online editor!

As a follow-up regarding this, Manuscripts for Mac 1.3.0 is now available for direct download here: https://rink.hockeyapp.net/apps/280aaebd99e1f12edc41b48d909db0c4 and will be appearing on the app’s “Beta Updates” feed in the next few days.

It allows for exporting your manuscripts as project bundle (a.k.a. .manuproj) files, which can then be imported into the Manuscripts.io web app (available for beta testing now at: https://dev.manuscripts.io) so you can test it with a copy of your current work. Closer integration with the web app to enable full manuscript syncing will be arriving in a future release. The 1.3.0 release also includes some smaller improvements and performance and stability fixes. Please see the release notes for a full change-log.

So, the exporting part seems to work, but I can’t import into Manuscripts.io - as in, I can navigate the menus and hit “import”, but nothing happens. This is in Safari 12; the login system is misbehaving so I’ve not been able to check in Firefox yet.

Is this still pending implementation or am I seeing a bug?

I have just tested in Chrome and Safari, and the import file dialog does appear for me - I can also successfully import a test docx file. So this clearly needs some more investigation…

It is worth noting that currently I think there is no progress indication of the import/export functionality on dev.manuscripts.io (this functionality is pending) - @alf, can you advise on if there are any potential issues presenting the dialogs on specific browsers. @adamjbuckley - is it a case of the Import dialog never appearing, or can you select a file to import and then nothing happens?

@dan - the import dialog works and I can select the .manuproj file; it’s just that nothing happens afterwards. Unfortunately my login details don’t seem to work any more at dev.manuscripts.io and the password recovery system doesn’t recognise my email address either so I can’t test further or try another browser

I’ve just successfully exported a project bundle from Manuscripts for Mac 1.3.0 and imported it into dev.manuscripts.io with both Chrome and Safari.

However, there’s currently no indication that the import is in progress until it completes, which can take a while. We’ve recently addressed this with a shiny new progress modal for the import and export processes, and this should be going live soon - we’ll post here once it’s available.

In the meantime, @adamjbuckley, if you’d like to send us the file that appears to be failing in Safari we can take a look and see if there’s anything else which might be causing a problem.

I’ve been trying to use Manuscripts for a research proposal, but its current state is making it really difficult. I exported my project from the Mac 1.3 application and tried importing into Manuscripts.io. The import seemed to go ok, but the project display is failing. I’ve included a screen capture of the error. 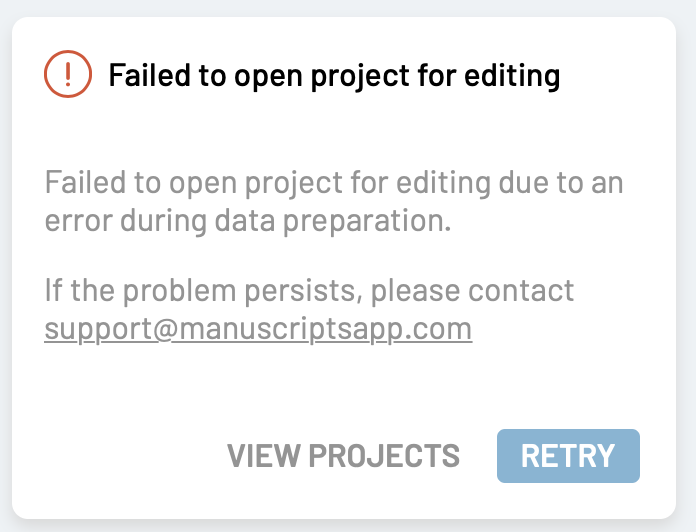 Also, there doesn’t seem to be a way to delete a project?

Sorry to be slow to get back to you, had ongoing problems with logging in to both community.manuscripts and dev.manuscripts for a while there.

Also I can’t upload the file because the .manuproj file type isn’t authorised on this site

A relevant updatet regarding this topic: the new Mac (and iOS) client development is progressing and we’ve got the code for it in open source form over here: https://gitlab.com/mpapp-public/manuscripts-cocoa-app